2012 marked the 10th anniversary of the dedication of the Wanganui Peace Sculpture, Handspan, to a Culture of Peace and Non-violence for the Children of the World, by H.E. Governor-General of New Zealand, Dame Silvia Cartwright.

This year, as in previous years, the community again gathered at 12 Noon to link with people throughout the world, who also met at midday local time to unite in prayers and to confirm their commitment to peace and goodwill to all beings: Kaumatua John Maihi opened with a blessing, followed by prayers and invocations by representatives from the Christian, Muslim, Hindu, and Baha’i faiths, concluding with Cr Sue Westwood re-dedicating the sculpture to a culture of peace. Before the release of 10 white balloons with white paper doves attached, Meg Hartfield read her beautiful poem written for this occasion. On this beautiful sunshine day, we all followed the flight of the cluster of balloons until out of sight. 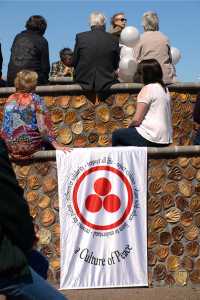 We were so delighted that Dr. Kate Dewes and Commander Robert Green had agreed to join our celebrations, and we kept them busy with several engagements to speak:

Our key speaker, Kate Dewes, spoke to the theme for this year’s Peace Day: “Sustainable Peace for a Sustainable Future”.