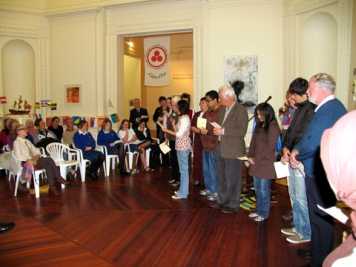 The Wanganui International Day of Peace began, as in past years, with a few people gathering at the Peace sculpture ‘Handspan’ at 12 Noon to link with the international peace vigil in silent prayers for peace and goodwill between all the world’s peoples. A few churches rang their bells to mark this moment of unity.

At this year’s main Peace Day commemoration, between 5 – 7 p.m., we had decided to highlight the 60th anniversary of the signing of the Universal Declaration of Human Rights, offering us an opportunity to reflect on the importance of the content of this document in today’s troubled world community. Between 65-70 people filled the dome of the Sarjeant Gallery, decorated for the occasion with large human rights posters and the flags of all the 192 UN member states, which Wanganui school children had made for last year’s Peace Day event. Our celebration was opened with a karakia given by Rev. Canon Graham Puru.

We had invited Wanganui high school students to choose the article(s) in the Declaration which they found particularly important and on Peace Day to share with us their thoughts and suggestions as to how we can work together to make them come true. Students from Wanganui High School and the Wanganui Girls College responded to our invitation, and their contributions included: the rights of the child to live in a world without hunger, without war and without any form of violence or abuse; the importance of the role of the woman for realizing the rights and freedoms of the Declaration; and one student expressed in a moving poem her own thoughts on article 18: “Everyone has the right to freedom of thought, conscience and religionâ€¦”

We were very fortunate to have New Zealand Human Rights Commissioner, Jeremy Pope, as our speaker. He gave us a comprehensive overview of the slow but steady growing awareness and acceptance of human rights, and the influence and impact that the Universal Declaration on Human Rights – “the first international statement to use the expression ‘human rights'” – has had on the world community since its inception.

Jeremy Pope stressed that all human rights should be seen as being: ‘inherent, inalienable, universal, indivisible and interdependent’, and that the most fundamental right of all, as stated in article 3, is the right to life itself and ‘not to be killed by another human being’. This right to life has been reiterated in the 1966 International Covenant on Civil and Political Rights: “Every human being has the inherent right to life. This right shall be protected by law. No person shall be arbitrarily deprived of his life”. He elaborated on some of the many obstacles to achieving universal implementation of human rights and freedoms in a world in which the fear of terrorism has led to anti-terrorism measures, such as the PATRIOT Act (‘Uniting and Strengthening America by Providing appropriate Tools Required to Intercept and Obstruct Terrorism Act’) which comprises ‘a litany of exceptions to freedoms traditionally enjoyed by US citizens’. Quoting Franz Kafka who said that “It’s often safer to be in chains than to be free’ (The Trial), Jeremy made the point that with freedom comes the need to accept the danger that goes with it. Freedom can be abused as well as provide the opportunity to transform the world into a better place. He mentioned all the men and women who as ‘civil society activists’ continuously faced danger as they worked to help heal, restore, and rebuild the local/global neighbourhoods.

Jeremy suggested that a free and fair society would be one that would: ‘protect and promote the welfare of all its citizens; provide a range of freedoms for individuals as extensive as possible compatible with equal freedom for all other persons; and provide rights, opportunities, protections and rewards to all on an equal basis and will not discriminate against any person on irrelevant grounds.’

In accordance with the UN Human Rights Council’s newly established Universal Periodic Review (UPR), New Zealand is currently reviewing its human rights record, and we were given a glimpse of how we as a nation might score. Jeremy believed that NZ would do well regarding civil and political rights – but was less certain regarding the economic, social and cultural rights: ‘a significant portion of our population subsists below the poverty line’ he said, and perhaps as many as a fifth of our children are not properly cared for in terms of food and general health. Even so, the New Zealand society aspires to be just and fair and to respect individual human rights to the greatest possible extent without intruding on the rights of others. We have, said Jeremy ‘a society that, overall, strives to weight itself towards providing protection for the weak and the disadvantaged’.

The ‘Tapestry’ choir sang ‘Blowing in the Wind’ before the candle, lit by Meg Hartfield at the beginning of the ceremony, was blown out – “taking thoughts of love, goodwill, justice to the nations, the earth and all its peoples crying out for peace” (from Meg’s Peace Day poem).

The headline of Wanganui Chronicle’s interview with Jeremy Pope, read “Why don’t we have a Ministry for Peace?” One day we will! 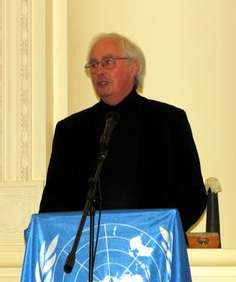 Wanganui High School student, Laura Hardcastle’s poem for Peace Day, inspired by: Article 18: “Everyone has the right to freedom of thought, conscience and religion; this right includes freedom to change his religion or belief, and freedom, either alone or in community with others and in public or private, to manifest his religion or belief in teaching, practice, worship and observance.”

Beliefs are a part of all of us.
They colour our world, explain dark and light.
They guide us when all hope is gone,
Give something to cling to, make the future seem bright.
They’re universal but as unique as fingerprints
And in a world where science rules our lives
They remain unfathomable,
Uncategorized.
For centuries religions have been our guides,
Differentiating right and wrong.
Whether they teach of God or gods,
They remain with us all lifelong.
Our thoughts are ours and ours alone,
They’re with us every night and day.
We’re free to believe whatever we wish,
Things haven’t always been this way.
The persecution of those with different beliefs
Just because they don’t conform
Has happened throughout our history
Before the United Nation’s reform.
Through out our past there have been
Too many incidents to recite
But one aspect they all have shared
Not one of them has been right.
It started in the days of ancient Rome,
Gladiators and charioteers,
When Christians were all thrown to the lions
To Roman citizen’s cheers.
Then on to the crusades of Richard the First
When Islam was persecuted
As Christians did battle in the “holy” wars
Then plundered, pillaged and looted.
Such battles between religions
Carried on through history
Until we reach the more modern times
Of the twentieth century.
To the harrowing images of the Holocaust,
The merciless slaughter of Jews
The emaciate figures of the starving
Down to the actions of a few.
The pictures seek to remind us all
Of man’s inhumanity to man
And illustrate the very real need
For the declaration’s ban
On persecution due to religion
For without it the world may sink
Back into those dark days past
Now we all have the right to think,
And believe whatever we wish to believe
Free from the ultimate control
For if you control a person’s thoughts and beliefs
You control that person’s soul.
What good are rights to freedom and life
If your thoughts are not your own?
Our ultimate sanctuary is protected now
By this article alone. (By Laura Hardcastle) 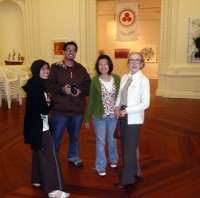