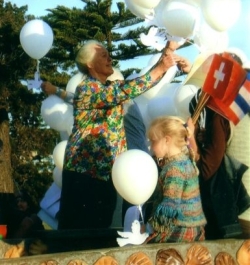 An event organized by Operation Peace through Unity and the United Nations Association Wanganui Branch in cooperation with members of the Wanganui community.

On this day, five years ago, the just completed peace sculpture ‘Handspan’ was dedicated to a culture of peace and non-violence for the children of the world. Our Peace Day celebrations then were held in the neighbouring Sarjeant Gallery, and this year we were fortunate enough to be able once more to celebrate the International Peace Day in this magnificent Home of the Arts, which played an indispensable role in the building of the sculpture.

About 70 adults and many children gathered at 5 p.m. at the Gallery where all were given flags to carry before proceeding to the sculpture led by those who were entrusted to carry the bunches of white balloons with little handmade paper doves attached. Once we all were standing within the walls of the spirals of Handspan with their several thousands hand prints, we took time to reflect on all the UN member nations represented by the 192 flags present, and that despite all the diversity and complexity of the human family we are one humanity under God, one Creation. In a moment of silence, before the balloons were distributed, we invoked love and goodwill to heal all relationships between nations and cultures, neighbourhoods and families. Then, as a poem was read by Meg Hartfield, and the beautiful voice of Rachel Smith chanted Donna nobis pacem the balloons were distributed to everyone and released, rising rapidly on a gentle breeze.

Returning to the Gallery we were welcomed by Manu Bennett and Raewyne Johnson, who acknowledged the link between the sculpture and that for which it stands and the Gallery. Then, on behalf of UNA NZ Wanganui Branch and OPTU, Branch President, Kate Smith, gave a short background for this day, dedicated to peace and non-violence, quoting the UN Secretary-General Ban Ki-moon’s appeal for a ‘passion for peace’ and mentioning the Manifesto 2000 leaflets which had been made available for any one who had not already signed the Manifesto.

Under Meg’s guiding hand the flags were then, one by one and with each country’s name said out loud, placed on a blue cloth representing planet Earth. The small children were also participating in this part of the ceremony with great enthusiasm. To watch flag after flag being joined together on the blue circular cloth until it was completely covered in the colours of every nation made a deep impression on us all.

The flags were made by Meg Hartfield in cooperation with several local schools and the children from the Quaker Settlement, and all the little doves attached to the balloons were made by Pat Payne.

Then Chelsea-Anne Phillips, a Wanganui District Youth Council member, gave us a most interesting account of some of her experiences from the recent UN DPI/NGO Annual Conference in New York (5-7 September) which she had just attended as OPTU’s Youth delegate. She mentioned the incredible impact of arriving in the mega town of New York around midnight after a non-stop flight from Wanganui in 93 degrees Fahrenheit; she spoke of how the visit to UN made her feel involved in something so much bigger than herself; and that how seeing the memorial to people who had lost their lives working for peace was like stepping into history. Chelsea spoke with passion on the topic of the conference, climate change and how it affects us all, stressing that each one of us must do what we can to overcome the many challenges brought about by climate change: “Think of your children, your grand children, and the world that they have been born into. They are going to suffer clearly for something that we caused.” We can all do something, she said, we can all change our attitudes and our lifestyles.

Thanking Chelsea for her enthusiastic and interesting talk, Gita mentioned how delighted both Eileen Ain and Iris Spellings, OPTU’s representatives to the UN Department of Information, had been to get to know Chelsea. Iris particularly admired how Chelsea had been ‘taking it all in – while also holding her own’ despite all the hustle and bustle of the conference with more than 2600 participants.

Gita said that in the past years the promotion of a culture of peace had been growing by leaps and bounds and given inspiration to a wide variety of initiatives worldwide, but also wondered whether sometimes we might be forgetting or ignoring some of the many dimensions of culture?

She talked about the Light which, according to an ancient scripture, shines ‘beyond the highest, the very highest Heaven’, which is also the Light that shines within each one of us; and she mentioned the quality of Love which the Lord the Christ asked us to express in our love of God, of our neighbours and of ourselves. Throughout history we have been reminded of these unbroken living links between the universal and the individual: the whole and all its many parts, which are providing the energies and qualities essential for the emergence of a true culture of peace. We are responsible, she said, for the anchoring here on earth of: “the Light and the Love of that LIFE which resides beyond the highest Heaven”. Gita expressed the hope that we would ‘give the new culture all the qualities entrusted in us”.

The formal part of the evening came to a wonderful and most beautiful conclusion with six members of the Community Choir: Jill Hobbs, Sue Baxter, Lynne Smith, Anne Strong, Penny Gribbon, and Tracey Brumpton, singing the Peace Prayer by St. Francis of Assisi.

After which we all enjoyed the pot-luck refreshments.