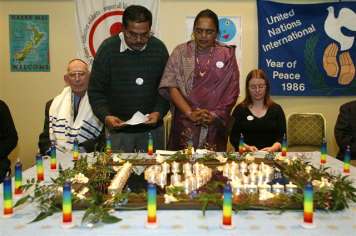 Wanganui Observes Peace Day
The first Wanganui Peace Day celebration marked the dedication of the Peace Sculpture to a culture of peace and non-violence for the children of the world, September 21, 2002. At that time a group of friends made the commitment to celebratye the day every year in Wanganui. Since then the Day has been observed as a cooperative effort, coordinated by Peace through Unity and UNA Wanganui Branch but involving people from many other groups, including the churches, Quakers, PPSEAWA, NCW, UCOL etc.

Peace Day 2006
Through the cooperation and participation of different groups and individuals within Wanganui our Peace Day celebrations are increasingly becoming a real community event:

At 12 Noon 6 churches rang their bells to mark the beginning of a moment of silence and, together with a group who had gathered at the Wanganui peace sculpture “Handspan”, joined in spirit and in prayers their fellow men and women throughout the world in a moment of silence for peace.

In the afternoon, at 5 p.m., the United Nations Association Wanganui Branch and Operation Peace through Unity had jointly coordinated a more formal Peace Day celebration in the Avenue Hotel & Conference Centre. Hoping for an attendance between 55 and 70 we were delighted to welcome about one hundred people of all ages and cultures to this event. Community members, especially a lay minister of the Anglican Church and the local branch president of PPSEAWA (Pan Pacific South East Asia Women’s Association) , had prepared the room with UN posters, flowers, small olive trees, banners and flags, and lit the candles which formed the numbers to date of UN member nations, with 19 rainbow candles waiting to be lit later when the names of all 192 nations were mentioned – ten at a time – by students and young people from different cultures and nationalities. 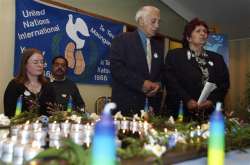 The celebration began with live music, again by young people, until, at 5.30, when the sound of a bell announced the beginning of the sharing of prayers, chants and invocations for peace offered by Kaumatua George Waretini and his wife Piki (Christian), Vijeswhar and Pushpa Prasad (Hindu), Claire Franklin (Bahai’ i), Ralph (Ze’ev) Holmes (Jewish faith), Ismael Sulaiman (Muslim faith) and Steve McBride (Pax Christi). This was a moving and powerful united appeal for peace and non-violence between all peoples of all religions and cultures throughout the world.

Then followed the mentioning of the names of all UN member states and the lighting of the rainbow candles before our speaker Dr. Chris Marshall, senior lecturer in Christian Theology at Victoria University, Wellington, gave us his Peace Day Address.

Chris Marshall is also a trained and experienced restorative justice facilitator and in his highly praised and widely read book “Beyond Retribution” he seeks to construct a moral, theological and biblical basis for restorative justice practice and also to critique the dominant notion of retributive justice.

Chris saw gatherings, such as this, which bring members of different religious and cultural communities together in dedication to peace, as evidence that it is possible for diverse human communities to live at peace with one another, even while treasuring their own cultural and religious differences.

He told the meeting of the initiative for establishing the Aotearoa-New Zealand Centre for Peace and Conflict Studies at a New Zealand university in the near future. More than NZ$1 million (of the five million aimed for) has already been raised. In response to a student’s question of ‘how much is the smallest donation you will accept?’ Chris spontaneously answered: “one dollar!” It is hoped that the Centre will begin to function in early 2008. To support this important project, aiming to educate people of all ages and within all sectors of society in peace making and peace building skills, contact Marjory Lewis. PO Box 56, 719 Mt Eden, Auckland 1030. E-mail anzpcsc@inug.co.nz.

In a short ceremony the accumulated energy of goodwill was dedicated to help bring peace and non-violence to the world and sent on its way with a poem written especially for the occasion by Meg Hartfield:
Candles of LIGHT
Our prayer
That the dark places of the world shine with the light of peace

Candles of COLOUR
Our prayer
That the drab places of the world be energized
With the vibrancy of peace.

Candles of SELFNESSNESS
Dying —- to give light — comfort —colour
Our prayer
That the selfishness of the world
Be overcome – with the loving of peace.

Thanks to two Universal College of Learning (UCOL) students who volunteered their time and skills to make a video of the meeting we have a record of this memorable event. 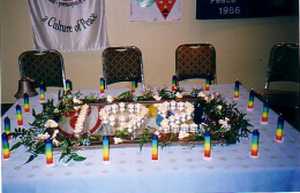